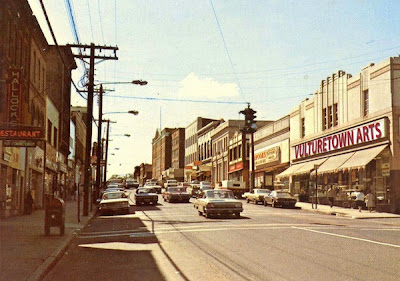 Vulturetown Arts is a creative group of Willimantic residents working towards providing a permanent venue for music, film, visual and performing arts. Our goal is to entertain and
inspire, and to promote a creative community. For now we are a roving organization so
keep a look out for our live shows, renegade art installations and our mobile art gallery.
We're here for YOU so go out and make shit! - VULTURETOWN ARTS

On Saturday, December 13th, Vulturetown Arts will present an evening with PARSONSFIELD (formerly Poor Old Shine), THE CAN KICKERS, and HANGING HILLS.

Parsonsfield is a five-piece Americana band from Connecticut that infuses a rowdy, rock-'n'-roll spirit into its bluegrass and folk influences, blowing away any preconception of what you think banjos and mandolins should sound like. Parsonsfield - Chris Freeman (vocals, banjo), Antonio Alcorn (mandolin), Max Shakun (vocals, pump organ, guitar), Harrison Goodale (bass), Erik Hischmann (drums)has toured steadily since 2010. In 2013 they recorded their debut album Poor Old Shine (Signature Sounds Recordings), produced by Sam Kassirer (Josh Ritter, Lake Street Dive). The critics were impressed, with David Vescey from the New York Times noting, "I fully expect to hear more from this band as the years go on." and the U.K.'s Maverick Magazine calling it
"A blistering energetic debut."

The Can Kickers are an old time band with drums. They formed in 2000 and have done over 700 shows in the U.S., Canada, Mexico, and Europe. Dan Thompson plays fiddle, Doug Schaefer plays drums, and Daniel Spurr plays banjo, guitar, and sings.

Hanging Hills is a folk rock band from Willimantic, CT that is becoming an integral part of the growing scene in the state's quiet corner. They craft songs that are heavily rooted in the past while maintaining a steady foothold in the present, constantly bridging the gap between nostalgia and innocent wonder. Hanging Hills is one of the most talented up-and-coming groups in Connecticut, and always ready to put on a quality, passionate performance.
Their debut full length, The Great Divide, is out now.