LUNG - cello & drum set duo passing thru on tour from the Queen City. Come up with a good description and they "will pay you mad cash." https://youtu.be/j5A89u5Gw3k
CONNOR DOTAY - SO SORRY lead singer/guitarist/apologist from Columbia, Connecticut
https://youtu.be/UjyIIPlmVLo
SENTIMENTS (a.k.a. DEFT HAND) - from Manchester, a "horrible town" according to nine-year-old boy on local Fox tv affiliate.
https://youtu.be/iHWhwDZPUGE
A free all-ages show with donations to the musicians encouraged.

Normally closed on Tuesdays, Willimantic Records will open up at 5pm on Tuesday, September 6th.

Music will start at 7pm. 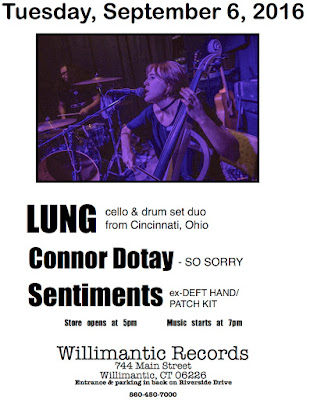 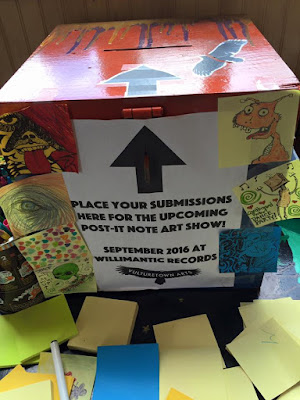 Vulturetown Arts plans to cover every square inch of wall space at Willimantic Records with post-it note artwork. To take part, just drop your post-it note art into the box here in the record shop or at The Willimantic Food Co-op during your next grocery run.

The opening reception is scheduled for 6pm to 9pm on Thursday, September 1st. Music will be provided by Cerise Montclair, JBrish and Boy Crazy.. 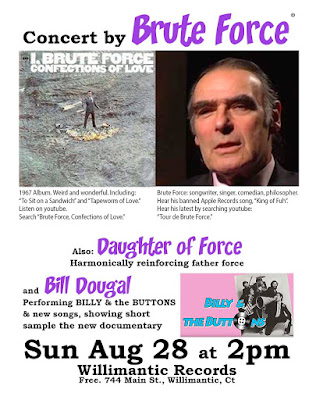 At 2pm on Sunday, local songwriter & caricaturist Bill Dougal will play songs from his days leading pun-rockers Billy & the Buttons along with a few of his newer tunes. Bill will also screen a preview of the upcoming Billy & the Buttons documentary.

Brute Force, accompanied by Daughter of Force, will follow with a career spanning set of Brute Force  compositions. Best known for his controversial "The King of Fuh" single on The Beatles' Apple Records label, Brute Force (a.k.a. comedian Stephen Friedland) has written thousands of songs, many of which were recorded by The Chiffons, Del Shannon,  The Cyrkle, The Tokens, Bernadette Peters, Little Peggy March, Chubby Checker, Tammy St. John, and dozens of other artists in the 1960s. Brute's two solo LPs, Confections of Love (1967) and Extemporaneous (1971), are both highly sought after by diehard collectors of psychedelic pop novelty vinyl artifacts.

Below is a bit more about "The King of Fuh" as well as a few youtube links. There will be no admission charge for the Willimantic Records show, but donations to the musicians will be welcomed and encouraged.

Here's the story: 41 years ago in New York City, George Harrison fell in love with an unreleased song called "The King of Fuh" by Brute Force, and decided to turn it into a hit record. So he went home to England, added strings from the London Philharmonic, and pressed it on The Beatles' own label Apple Records--only to discover that there were some things even a Beatle couldn't do. After Capitol/EMI refused to release or distribute the droll ballad with its controversial chorus ("I said the Fuh King -- he went to wherever he wanted to go / Mighty, mighty Fuh King / All hail the Fuh King"), The Beatles privately pressed 2000 copies for their friends, which made "King of Fuh" the rarest Apple record of them all. - brutesforce.com

"The King of Fuh" by Brute Force 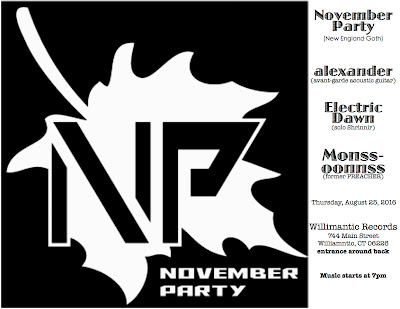 MONSSOONNS - the guys from PREACHER are now sound sorta like FLIPPER and are known as Monssoonns.

Music starts at 7pm.
Posted by Willimantic Records
Email ThisBlogThis!Share to TwitterShare to FacebookShare to Pinterest 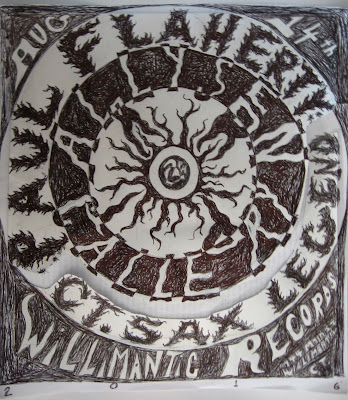